Chris 'Bad News' Barnes is a live performer. After logging over 2,000 stage shows with Chicago's legendary Second City comedy troupe, Barnes has brought that expertise to the Blues concert stage. On the Legendary. Rhythm & Blues Cruise #32, along with a crew of world-class musicians including special guest lead guitarist Gary Hoey & harmonica ace Steve Guyger, Chris Barnes delivered three amazing knockout shows. Grammy Award-winning producer Tony Braunagel and engineer Johnny Lee Shell of Ultratone Studios and the Phantom Blues Band, who were also on board playing with Taj Mahal, were able to record and capture the lightning energy of these shows. VizzTone and BratGirlmedia are proud to present the follow up to Barnes' #1 chart-topper, 'Hokum Blues,' Chris 'Bad News' Barnes' third album, LIVE '13 blistering cuts that will make you feel you are in the middle of these rocking live shows.

Hokum is a particular song type of American blues music – a humorous song which uses extended analogies or euphemistic terms to make sexual innuendos. This trope goes back to early blues recordings, and is seen from time to time in modern American blues and blues-rock. 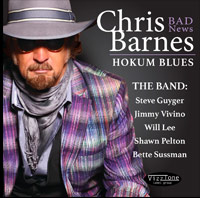 Let Me PLay With Your Poodle2:33

Things About Coming My Way4:17

You Can’t Get Enough of That Stuff5:01

Somebody Been Using That Thing5:29